Anyone and everyone is invited!!! 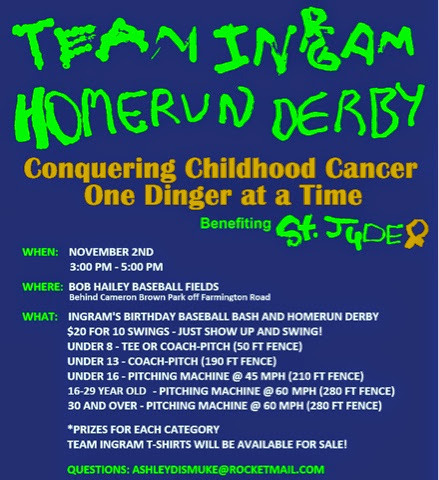 Today Is MRI Day and we decided to keep the girls out of school and go to the hospital together as a family.  Getting an unexcused absence is well worth the emotional craziness of the day being apart and having the girls ask to call us all day long to see how their little brother is doing.  It may be a lot more chaotic and loud and stressful when all three of the kids are together, but Ingram would have it no other way!  First up, Assessment/Triage appointment at 7:00am for statistics and his IV...

October is always a fun month because starts out with Ingram 's birthday! And of course if it's Ingram's birthday, it's also Beau's birthday which makes it even more fun!!! So here are the birthday boys...Ingram is 6 years old and Beau is 3 years old!  Happy Birthday to them!!

Then came the weekend and we ended up with two tickets to the Ole Miss game so this happened! We'll just call this a special birthday trip with Daddy!  They had so much fun at the game and even got to meet a very special celebrity on accident...Katy Perry!  Ingram was walking around in the hallway (wearing his Ole Miss jersey) and Katy said "Go Rebs!!" to him and he said "What???" with the craziest facial expression of all.  So then of course, she comes back to him and squats down and repeats it and so do he.  Then she explains why she said it and asked him who he was cheering for; so he asks Daddy who says Ole Miss and then Ingram says "Oh okay" and proceeds to show Katy Perry how he can hop on one foot because that's way more impressive than being a superstar singer.  And no, there were no pictures taken because Ingram had no clue who she was and was just talking to her like he talks to everyone.  It was no big deal....until his sisters found out!!!


The other best thing about October is Fall Break!  The girls got a whole week off from school and Ingram had 3 days off; Daddy took the whole week off which was totally fantastic!!!  We were supposed to go to the beach, but ended up staying in town and having all sorts of fun and doing all sorts of work at home.  And a fun week at home is just what we needed, especially leading up to scans!  We stayed up way too late every night and had way too much fun!


Ingram hasn't had his "regular" check up with his Pediatric Cardiologist since the April 3rd 2012.  Every since Craig's heart diagnosis back in 2007, the kids have all had yearly heart checkups until they were cleared which meant the holes in their hearts were closed.  Both of the girls were cleared several years ago, but Ingram's last appointment was on the same day his original CT was scheduled.  He hadn't been cleared yet, so I figured we'd have his checkup then too since it's in the same building.  Obviously since that day, our lives changed forever and I hadn't even thought about his yearly checks that I had missed.  Well, they called for his checkup the other day and I said we'd come, but I told Craig I would need him to go with me because I didn't think I could go into that building without falling apart.  When it came time to go, Ingram and Craig left by themselves because Ingram picked only Daddy to go with him and I nervously waited at home.  After many texts from Craig about the forms to fill out, allergies to what medicines, list of regular medicines, and more, he finally sent this picture of Ingram taking the Moose's blood pressure and I calmed down a bit.  Then next text I got (it seems like hours later) was "Perfect Heart" and I of course started crying then immediately sent a whole set of questions to ask making sure they knew about "this and that" and then the phone rang and it was Craig repeating his whole conversation with our Doctor regarding EVERYTHING from the past 2 and a half years including the how chemo could damage hearts (a risk we knew) but that his heart looked perfect.  Oh the tears came flowing down!  You have no idea how good it felt to get that report, especially a report I'd been worrying about every since they called days before knowing that chemo can damage hearts and knowing that there his hadn't been cleared yet.

Lindsey had a cross country race Saturday so we'd all been at Shelby Farms during the week and on Saturday for her to run her mile.  Lindsey ran super fast and placed 2nd in the West Tennessee Regional Elementary Cross Country Race with a time of 6:40.  She even qualified for the State Elementary Cross Country Meet in Knoxville!!  It was amazing to see all the Elementary and Middle School kids out there running and having so much fun that I think it even made Madison want to run faster when she ran her two miles for soccer that weekend.


Since we're always running, Ingram decided that he wanted to run the "marathon" (don't freak out, he calls anything running or biking for SJ a marathon).  We told him he would need to run a mile first and so he said okay and changed into running clothes 2 minutes later.  And then this happened...

And then came Monday!  The girls are back in school, but this time Ingram is the one out of school!  He was loving getting to sleep late (which of course he didn't) and loved even more having a play day with is buddy Nolan!

Since Ingram is in Kindergarten, he's been working on lots and lots of stuff.  One of the hardest things for him is "language" stuff.  Math comes far too easy for him and even with is testing form SJ, we are seeing these different "processing" centers acting totally different just as they said might happen.  It took Ingram a few weeks to learn his first set of number and color sight words, but this list of 22 words was proving even more difficult for him to learn.  After working for what seems like a month or longer, Ingram was so excited to finally read all 22 sight words on this list and get to sign the Club 22 poster!  Of course, just like us, St. Jude is never far from his mind!  Subconsciously I think I was hoping that he would do this before his scan the same next day just in case anything showed up.


We've been preparing mentally and emotional for Ingram's scans for the next day for about a month, but the fighting, arguing, and bickering that comes along with Scanziety had reached a new limit and we'd had enough of it.  Having a whole week off of everything was wonderful and just what we needed, but at the same time, we were in the house for a whole week with this stupid scan day looming and now it was here and we were beyond ready to get the day over.

Right around the time the kids were getting out of school, it started getting a extra nutty around the house with the kids and  crazy bickering with us from all the stress for Ingram scan the very next day.  Seriously it was more than we could handle...and then we get a phone call from the Tim Tebow Foundation!  Oh my goodness...it's totally out of the blue and crazy and awesome and ...
0 comments

Click on the green Team Ingram picture to make a donation!